It is a bright and brisk spring day in tiny L’Arbresle, France, about 30 miles northeast of Lyon, France in the Rhone Valley region.  I just got off a short train ride from Lyon at the train station which looks like a medieval meeting house.  I’m on foot and my route to my destination is all uphill for next couple of miles.  As I begin my trek I ask myself why is it that so many of my architectural pilgrimages involve a lot of walking and a lot of walking uphill to reach some masterpiece of enlightenment.  OK, the answer is I am too frugal to rent a car, and I am just another crazy architect.

The route is pleasant enough as I pass through several neighborhoods.  The further out from the center of town I go, I notice the houses are newer structures of one and two levels and with small yards.  Suddenly the terrain changes to plowed fields and grassy pastures with cows.  Next, I come to a few sharp curves in the narrow road and the scene becomes more bucolic as a small pond with a single large shade tree appears, all looking like it was specially designed that way, as if designed to be in a Manet or Monet painting.  On the next turn, I find myself on a long, straight, tree-lined path where tall trees on both sides of the path reach over to each other to form a tunnel green leafy shade.  Finally, on approach the top of the hill, just as the constant incline I’ve been treading the last hour or so turns pleasantly level, I catch my first glimpse of the iconic bell tower, signifying my arrival.  Soon, I am face to face with the Priory of Sainte Marie de La Tourette, ( known just as LaTourette to some folks ), a rather large sculptural concrete structure of intriguing form and stature, another of the renowned French architect Le Corbusier’s ( known affectionately as Corbu to architects, all of us which dutifully studied in architecture school) masterpieces and a required pilgrimage for all architects, artists and creative souls from all spans of the earth.

The main construction material of LaTourette consists of “brutalist” style concrete which is concrete which exudes a very rough and linear texture that results from using rough wood planks as the formwork that supports the concrete as it is poured and as it cures to a hardened state.  The contrast of this brutal style concrete and the massive boxy forms, combined with slender vertical lines of supporting columns and glazing mullions all juxtaposed with the rolling green terrain and trees is both shocking and at the same time exhilarating.  Constructed in 1959 for the Dominican friars, LaTourette is not a monastery, rather, it was originally built and still is a priory which is more of an academic retreat used as a alternative to and a complement to public universities which strictly adhere to the doctrine of separation of church and state.  Originally it housed up to 75 friars and was not open to the public.  Today, it is still a priory but with only 15 frialrs in residence and is open to the public by means of reserved tours on Sunday, and, for those interested, offers full-board lodging and use of the work spaces, available by reservation.

The overall physical form of LaTourette is that of a large rectangular plan composed of a u-shaped wing which comprises the main entrance, living spaces, a chapter room for meetings and discussions, a library, a refectory for dining, and a small special cube-shaped oratory used as a special prayer space and which projects out into a central exterior courtyard space.  This wing wraps around a rectangular exterior space which is further contained on the open side by a boxy concrete church structure which consists of essentially a concrete box that is carefully composed with special vertical and horizontal widow openings which allow natural light to provide a spiritual glow to the space.  The walls are again the brutalist concrete with its highly textured surface.  It is all very simple and stark while at the same time pleasantly composed to produce a pleasant space for spiritual ceremony.

Directly below the church is a fantastic crypt space whose sloping floor follows the original natural contours of the surrounding terrain and which contains a series of altars on stepped platforms.  Each of these altars are carefully positioned below its own round tubular skylight (called a “light cannon”).  Originally, every friar was required to daily take individual mass in the crypt.

In the church and the crypt spaces, Le Corbusier sparingly used fully saturated primary colors of red, yellow, and blue that, along with the introduction of natural light, produce spaces of a special spiritual quality.

Architecturally and spiritually, LaTourette is a fantastic experience! 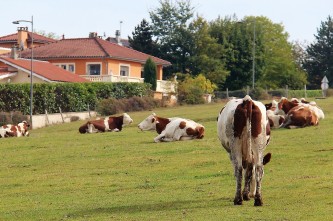 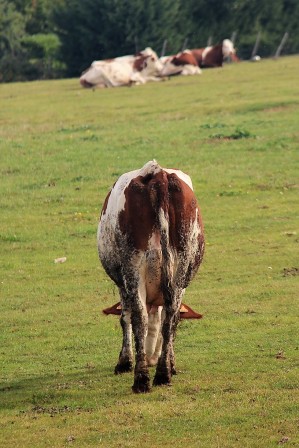 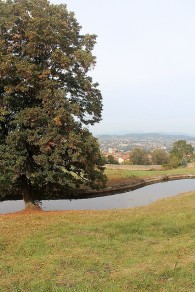 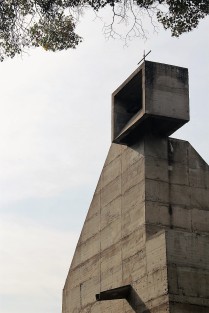 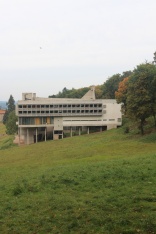 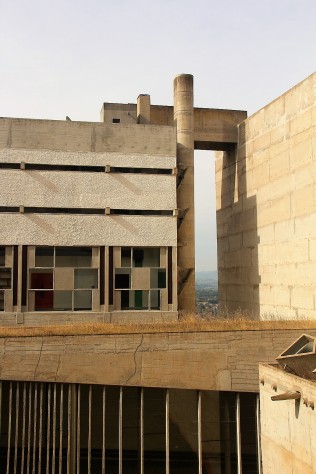 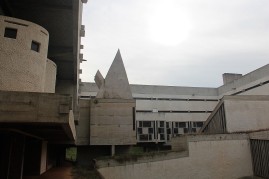 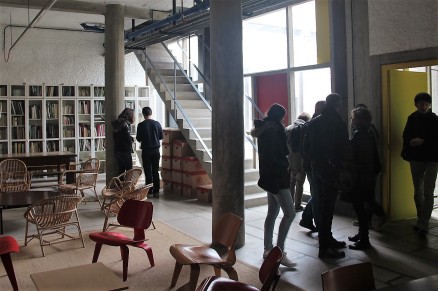 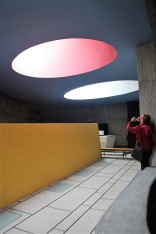 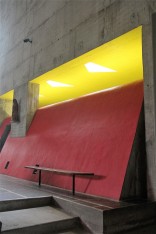 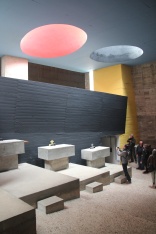 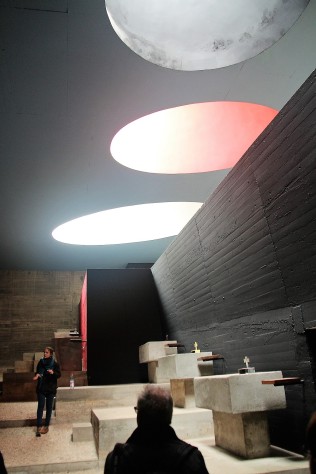 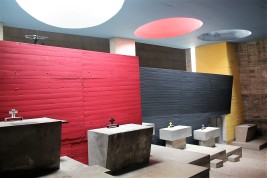